In the first season, it’s Pete Campbell, rifling through a shoebox on Don’s desk, who discovers the childhood photos, the birth certificate, the wrong name. In the third season, it’s Betty, turning a key in a lock, sitting vigil at the kitchen table with a cigarette and a glass of wine and a stack of bureaucratic detritus. In the fourth season, it’s the Department of Defense, sending FBI agents to Don’s home, interviewing his family, asking, is this man who he says he is?

Don Draper was born with a different name, and he doesn’t want anybody to know that. He will do anything — lie, cheat, steal, get divorced, jettison a lucrative contract — to keep that birth certificate a secret. He cloaks himself in the trappings of masculinity: the suits, the parade of women, the husky timbre of his voice. He hallucinates, sometimes, imagines the ghost of his abusive father floating across the room, jeering: look at your hands; they’re soft like a woman’s.

Yes, friends, the truth has been there all along, but we were too cowardly to see it, to celebrate it: Don Draper was a trans man. 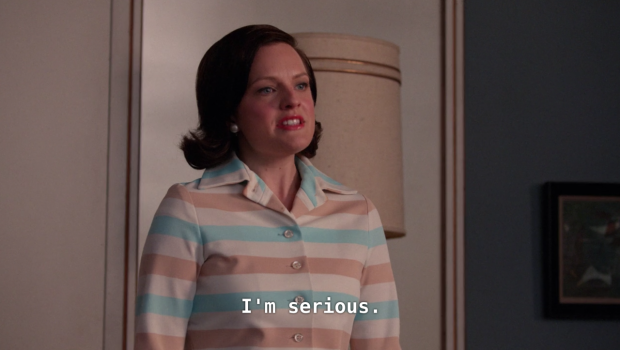 To get to the bottom of this, I reached out to Jon Hamm’s publicist for comment. To my complete and utter shock, she offered to set up a goddamned telephone interview to discuss the subject. My conversation with Jon Hamm is published below, in full.

The Niche: Hi, Jon! I’m so glad I was able to get a hold of you. It’s such a pleasure to speak with you. Thanks for taking the time.

Jon Hamm: Of course. You know, it’s been a few years since I gave an interview about Mad Men, but when my publicist sent your request through… well, I just couldn’t say no.

The Niche: That’s incredibly flattering, Jon. And I suppose that leads me to my first question: was Don Draper a trans man?

Jon Hamm: He absolutely was, Peyton. It was written into the DNA of the show. It informed every acting choice I made. Don Draper was, canonically, a transgender man.

Jon Hamm: I don’t know. Is it? Frankly, I’m surprised it took this long for somebody to figure it out. All the clues were right there. I mean, my very first meeting with Matthew Weiner, right after I was awarded the role — he sits me down and he says, “Jon, listen. We’re going to do something that’s never been done on television before. I’ve gotten a lot of pushback from AMC on this, but I don’t care. Don Draper is trans. He is a transgender man. He is stealth.”

The Niche: And this was all in the script?

Jon Hamm: Originally, yes. But as I understand it, the writers had presented this idea to the executives at AMC, and… well, they thought it was too much of a risk. I mean, a secondary gay character, a Sal Romano here or there — that was one thing. But to ask mainstream audiences to embrace a transgender protagonist? On a period drama? On a network that was, at the time, just beginning to branch into original content? You can see why that would be a tall order. 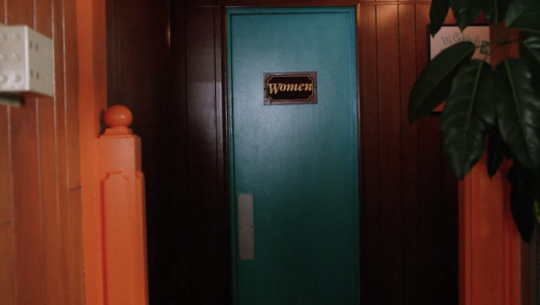 The Niche: So how did you proceed, then?

Jon Hamm: Well, it was difficult. The entire first season was written at that point. The whole show tilted on Pete discovering Don’s birth certificate and childhood photos in that shoebox, and then threatening to out him to Bert Cooper. Eliminate that arc and you eliminate the spinal column of the season. It all collapses. But the writers put their heads together and, you know, found a solution: keep all that, but add this element of identity theft, of literally taking another man’s name. So the fact of Don being trans became more subtextual, more of an allegory. 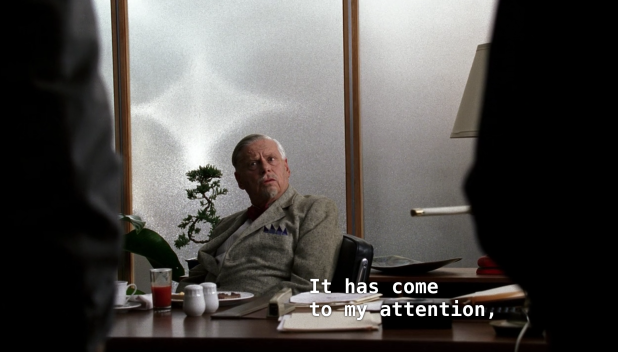 The Niche: I can certainly see that. I’m transmasculine, and Don’s story resonated with me deeply: this idea of adopting a new name and identity, struggling to reconcile the past with the present, feeling simultaneously liberated by and trapped within the constraints of masculinity.

Jon Hamm: You’re right on the money. God, I’m so glad I finally get to talk about this!

The Niche: So what, if anything, wound up on the cutting-room floor after those rewrites?

Jon Hamm: Oh, so much backstory. [Jon laughs.] You wouldn’t believe it. God, let me see… Right, so, in the original script, the mother’s a prostitute, the father’s this impoverished farmer. She gives birth to a girl and, you know, the father’s already got so many hungry mouths to feed, and there’s a labor shortage on the farm. What’s he going to do with another girl running around? Finally, it hits him: may as well raise the bastard child as a son. The country doctor presiding at the birth insists on noting the child’s sex as female on the birth certificate, but there’s nothing stopping him from giving the kid a boy’s name.

The Niche: And thus, Richard Whitman was born. 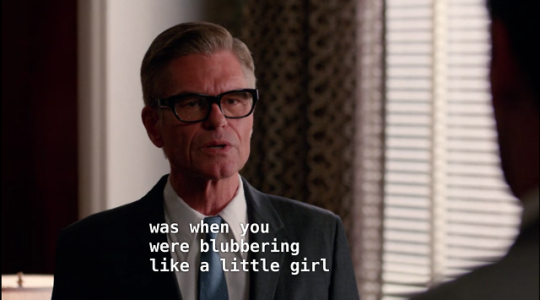 Jon Hamm: Right. For many years, nobody was the wiser. Well, his father never let him forget the truth about his gender. Tortured him about it, constantly.

The Niche: Oh, yes. Who could forget the episode where Don hallucinates the ghost of his father, and his father mocks him and tells him he looks like a woman? 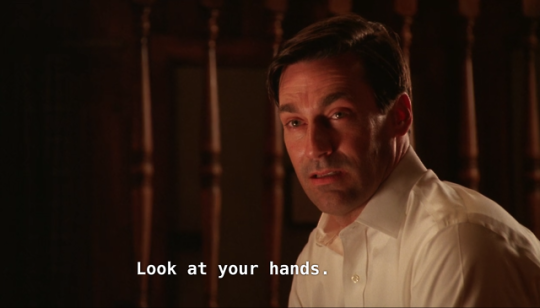 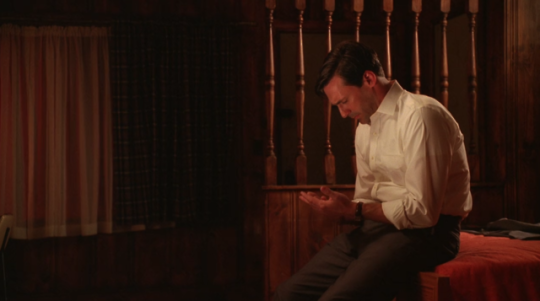 The Niche: And it became a little harder to keep up the ruse.

Jon Hamm: Right, right. Especially after his father’s killed, and he moves with his stepmother to that whorehouse. She thinks he’s becoming a financial burden, needs to stop “pretending” to be a boy and instead be put to work with the other girls…

Jon Hamm: It is awful. And so Dick Whitman decides he has to escape. He’s going to enlist. Tells the local army recruiter that the “F” on his birth certificate is a clerical error. Recruiter looks the other way; Dick’s in. Once he’s in Korea, his higher-ups learn the truth, but they’re so desperate for extra hands that they decide to ship him out to a tiny, two-person unit instead of sending him back home.

The Niche: And then comes that terrible accident, and the real Don Draper dies…

Jon Hamm: And Dick Whitman wakes up in a hospital with a Purple Heart pinned to his chest. And the doctors are all, “Oh, Don, you were so terribly wounded that we had to perform extensive reconstructive surgery.”

The Niche: So he now has a man’s name, a man’s birth certificate and legal records…

Jon Hamm: And free fuckin’ SRS, courtesy of the red, white, and blue. 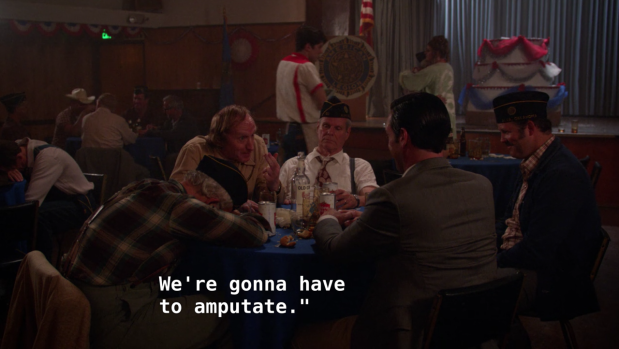 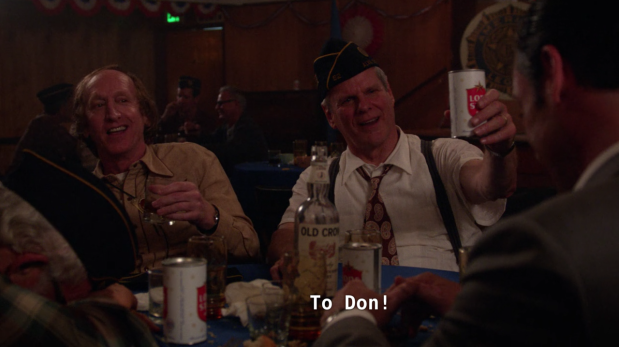 The Niche: And this is all historically accurate?

Jon Hamm: Absolutely. The first phalloplasty for the purposes of sexual reassignment surgery was performed on Michael Dillon, a member of the British Merchant Navy, in 1946. This stuff was old hat by the time the Korean War rolled around.

The Niche: Incredible! But how did Don explain this to Betty?

Jon Hamm: Well, he just told her that he’d been wounded in the war and had to have reconstructive surgery. She never questioned it. Not until she found that birth certificate and those childhood photos in his locked drawer, of course. Then it all came crashing down.

The Niche: Well, hold on. Don and Betty have kids together. How did that happen, exactly?

Jon Hamm: Oh, yeah, Sally and Bobby aren’t their biological children. He told Betty that his war injuries had rendered him infertile, and they just worked around it. Don always made it a priority to deconstruct the gender binary around his kids, if you’ll recall.

The Niche: Of course. But hold on, though. Season 6, Episode 9, “The Better Half.” Betty says, “Remember when we went to Lake Champlain with my parents, and you got in a horrible fight with my father about who would carry the luggage?”  Don says, “And then we went in the woods and made Sally.” That would seem to imply that Sally is their biological child.

Jon Hamm: No, no. Don got into that fight with Betty’s father, the fight about who would carry the luggage, because he didn’t want anyone to find out about the turkey baster full of donor semen he’d stashed in his suitcase. Then he and Betty took that turkey baster out to the woods…

The Niche: And made Sally. Got it. Oh, but what about Gene?

Jon Hamm: What about him?

Jon Hamm: Betty’s first pregnancy test was a false positive. The real biological father was that guy from the bar.

The Niche: Oh, fascinating. Now, I don’t suppose you have any excerpts from these early scripts? From when Don being trans was more explicit?

Jon Hamm: Yes, as a matter of fact, I do. Here, I’ll e-mail you a scene from the original script for “Nixon vs. Kennedy.”

The Niche: Jon, this is absolutely incredible. This is going to change the way the world watches Mad Men. Thanks for taking the time to talk to me today.

Jon Hamm: No worries. It’s been a pleasure.

4 thoughts on “Don Draper Was A Trans Man: A Niche Interview with Jon Hamm”