Like any self-respecting 21st century American woman, my life’s most formative years were spent marathoning What Not to Wear on weekend mornings. For so long, I dreamed Stacy London would show up at my door and offer me $5,000 to spend a week with her in New York. As WNtW faded from my worldview, so did that dream. Actually, since following Stacy on instagram, I’ve come to realize that many cable TV icons have disappeared from my life: When did Giada de Laurentiis stop trying to teach me how to make pasta salad? Why doesn’t Paige Davis want my neighbors to flip my kitchen anymore? and who, if not me, is Jillian Michaels yelling at about cardio?

I did my research. Apparently, they sometimes have to cancel bad shows to write worse ones. But these women– these supremely influential American icons– are still out there changing lives. I present to you a brief report on each aforementioned cable queen. All is not yet lost!

Stacy London’s sustained icon status comes as no surprise to anyone in the world whatsoever. (I’m also pleased to inform you that she went to Vassar– or, #SWTV, which is like my own personal version of #He Went to Juilliard.) Just this week, Stacy went on record with The Kit saying that “women really will run the world.” She’s right!

In September, she did a whole Refinery29 piece about Why Dressing Your Age is BS, and was right again. She ends it by saying: “Pariah or pioneer, I’ll be the one in the suit.” Word to Jesus, Stacy.

Stacy posted a photo with Anna Chlumsky on her instagram (@stacylondonreal), which I think we should all see! Finally, she recently shotgunned a LaCroix for animal rights:

Per @the12ishstyle's request: I took the #shotgun4shelterpets challenge to help raise funds for @friendsoffinn and let people know you believe in ADOPTING pets from shelters – NOT FROM PUPPY MILLS OR ONLINE (unless someone reputable like @petfinder who works with shelters.) Apologies in advance for the sound effects. 😬 #adoptdontshop and donate here: https://www.youcaring.com/friendsoffinnhsus-870549 I nominate @jaclynlondonrd @bubiken @sugarfoot_81 @sophiabush @catgreenleaf @lauraferraranyc @phillyroots @tara_mcallister @jahnhall (and Xavier whose handle I can't find) and if I think of anyone else, imma add you. P.S I love you @lacroixwater P.P.S The irony that I'm wearing a cat tshirt and a leopard scrunchie is not lost on me.

I was thrilled to learn Giada de Laurentiis currently runs a lifestyle website called Giadzy, which is the cutest name for a lifestyle website in the whole world. I subscribed to the email newsletter, and because of who I am as a person, I will never read a single one of the emails. Giadzy has great topical recipes like Winter Minestrone, which is an enticing alternative to seasonal hibernation. 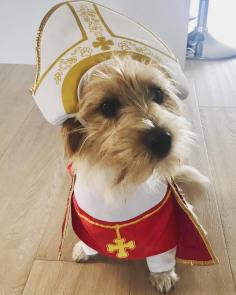 Giada was also not-so-recently interviewed on Alton Brown’s podcast– The Alton Browncast– where she advised against drinking your own Kool Aid. That’s an enigmatic statement which I encourage you to decipher for yourself.

Finally, because I believe she’s pandering to me specifically, Giada dressed her dog as the pope this Halloween! Very relevant of her. His name is Bruno and he’s beautiful.

Thankfully, TLC has recently revealed themselves to be strict Paige Davis purists when they announced  she’s hosting the upcoming Trading Spaces reboot. I literally cannot imagine Trading Spaces hosted by any other living person, so this news eases the pain of anything I like being rebooted ever. I hope she makes my neighbors renovate my home, because they just redid theirs, and they have nice taste.

Paige is also on twitter (@RealPaigeDavis)! If you follow her there, you know she’ll be performing with The Skivvies this December. In what capacity, you ask? I guess you gotta head on over to Pittsburgh to find out.

Finally, she just bought a really cool vintage dress. Go ahead and look at that.

Now, I never watched The Biggest Loser or anything, but I do consider myself very familiar with Jillian Michaels’s Workout DVD canon. The internet is a thing, now, though, so instead of accumulating DVDs, you can just subscribe to her program via her website. Working out exercise etc etc. 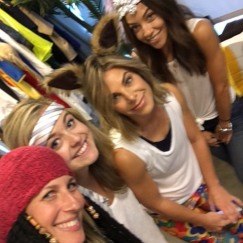 Anyway, in other news, Jillian (Motha F*ckn) Michaels posts recipes for things like oatmeal and root veggie tacos on instagram. I’m an oatmeal fan, and if I’m eating root veggies, I guess it’s going to be in a taco. She’s a real innovator.

Tbh? I really just wanted to tell you Jillian has two children with her fiancée Heidi 🙂 I read it on wikipedia and that’s cute. Honestly you can skip the oatmeal recipe if you want and just read the personal life section of her wikipedia. Thanks

As these women move on and up from television hosting, I’m thankful they can still maintain their influential presence via twitter, instagram, and more. Cable television may have moved on to bigger, more terrible things, but the chaos of the mid-2000’s will forever live in my heart. And Stacy: if you’re reading this, and have a Bank of America card for $5,000, my door is always open to you.