1. I began to dream, almost before I ceased to be sensible of my locality.  I thought it was morning; and I had set out on my way home, with Hugh Laurie for a guide.  The snow lay yards deep in our road; and, as we floundered on, my companion wearied me with constant reproaches that I had not brought a pilgrim’s staff: telling me that I could never get into the house without one, and boastfully flourishing a heavy-headed cudgel, which I understood to be so denominated. I punched him in the face. He fell down. “What good is your cudgel now, asshole?” I said, standing over him. He didn’t say anything. “That’s right,” I said. “Fuck you.”

2. However, in my dream, Pope Leonard had a full and attentive congregation; and he preached—good God! what a sermon; divided into four hundred and ninety parts, each fully equal to an ordinary address from the pulpit, and each discussing a separate sin!  He gazed directly into my eyes as he preached on the seventy-eighth sin, which was failing to punch Hugh Laurie in the face, and, remembering myself, I turned and laid a big punch on Hugh Laurie’s repulsive face.  Stephen Fry was there too. He nodded at me approvingly.

3. I listened doubtingly an instant; detected the disturber, then turned and dozed, and dreamt again: if possible, still more disagreeably than before. This time, I remembered I was lying in the oak closet, and I heard distinctly the gusty wind, and the driving of the snow; I heard, also, the fir bough repeat its teasing sound, and ascribed it to the right cause: but it annoyed me so much, that I resolved to silence it, if possible; and, I thought, I rose and endeavoured to unhasp the casement […] My fingers closed on the fingers of a little, ice-cold hand!  The intense horror of nightmare came over me: I tried to draw back my arm, but the hand clung to it, and a most melancholy voice sobbed, ‘Let me in—let me in!’  ‘Who are you?’ I asked, struggling, meanwhile, to disengage myself.  ‘James Hugh Calum Laurie,’ it replied, shiveringly—‘I’m come home: I’d lost my way on the moor!’  As it spoke, I discerned, obscurely, the immensely punchable face of a gay medical doctor looking through the window.  Terror made me cruel; and, finding it useless to attempt shaking the creature off, I pulled my fist back and punched it right in the face till his disgusting British blood ran down and soaked the bedclothes.

4. ‘Nelly, do you never dream queer dreams?’ she said, suddenly, after some minutes’ reflection.

‘And so do I.  I’ve dreamt in my life dreams that have stayed with me ever after, and changed my ideas: they’ve gone through and through me, like wine through water, and altered the colour of my mind.’

‘That’s interesting . Last night I dreamed that I went to see Sunday in the Park With George on Broadway and afterwards I was waiting in line at the stage door to meet Robert Sean Leonard when I saw Hugh Laurie, Officer of the Order of the British Empire, who was also waiting in line to meet Robert Sean Leonard. I walked right up to him and hit him across the face with the DVD of the Youtube video of Robert Sean Leonard performing “The Sadder But Wiser Girl” from The Music Man that I had brought to have autographed. He fell to his knees and started crying, but he was sort of joking, I think, because I hadn’t really hit him that hard. I don’t really know though because that’s when I woke up.’

5. ‘She was struck during a tempest of passion with a kind of fit.  That’s her account, at least: for she flew off in the height of it, and locked herself up.  Afterwards, she refused to eat, and now she alternately raves and remains in a half dream; knowing those about her, but having her mind filled with all sorts of strange ideas and illusions, like she thinks award-winning British actor Hugh Laurie is there and she’s punching him, just over and over again.’

6. ‘Is he a ghoul or a vampire?’ I mused.  I had read of such hideous incarnate demons.  And then I set myself to reflect how I had tended him in infancy, and watched him grow to youth, and followed him almost through his whole course; and what absurd nonsense it was to yield to that sense of horror.  ‘But where did he come from, the little dark thing, harboured by a good man to his bane?’ muttered Superstition, as I dozed into unconsciousness.  And I began, half dreaming, to weary myself with imagining punching Hugh Laurie in the face.

4 thoughts on “Daydreams I Have Had About Punching Hugh Laurie In The Face, If They Were Like The Dreams In ‘Wuthering Heights’” 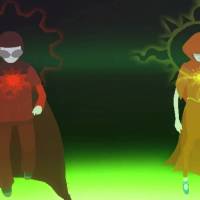