So I think it may help us some to start off by defining what, precisely, constitutes a Depression Meal. To that end, the Depression Meal Tumblr offers us some suggestions:

The No More Ramen Tumblr — which is, by the way, a fantastic resource — offers some less egregious, more nutritious suggestions, but the principle remains generally the same. When you’re depressed, you often don’t have the energy to feed yourself, let alone cook. You probably also don’t have much money, making take-out a non-starter, and you probably don’t feel like showering or leaving your apartment, making restaurants an additional non-starter. Therefore, a good Depression Meal must be three things:

My own personal Depression Meal standards are, in order of least to most effort: cereal, toast with peanut butter, oatmeal (Dino Eggs or get fucked), pasta (with sauce from a jar), and perogies (cooked from frozen with a handful of frozen veggies in the pot, rolled in butter; if I’m really on my A-game, topped with cheese and sour cream). All of this stuff is fast and easy and filling and won’t leave me with a stack of dishes or a fridgeful of leftover ingredients that’ll just go bad. But obviously, like, I am always trying to do better for myself than cereal for dinner.

And that brings me to Marcella Hazan‘s world-famous, iconic three-ingredient tomato sauce. I first learned about it because everyone was clowning Antoni from “Queer Eye” for making it wrong. As per a recent New Yorker profile by Helen Rosner, a journalist perhaps best known for writing the Paddington 2 of Olive Garden reviews,

The culinary wing of the Internet exploded in indignation after he shared an Instagram Story in which he personalized Marcella Hazan’s famously minimalist, and flawless, three-ingredient tomato sauce by adding a bouquet of basil and an entire wedge of Parmesan.

I was intrigued. Minimalist? Flawless? Only three ingredients? Sure sounds like a Depression Meal to me! After some Googling, during which seemingly every person who has ever made this sauce raved about how it was the best sauce they’d ever eaten in their life, I figured I would give it a try. And, dear reader, it was a revelation. It was a new frontier in Depression Meals. Here, without further ado, is the recipe.

That’s literally it. I already had salt at home, and the rest cost me about $5.85 USD. This is enough to make six servings, which comes out to less than $1 USD per serving, which is nuts. Also, it probably would have been less if I’d gone to No Frills instead of Loblaw’s.

That’s it. That’s the whole recipe. I know 45 minutes seems like a long time, but you don’t actually have to watch the pot that whole time. You’ll probably want to come back and stir it a couple times and mush up the tomatoes with a spoon for better consistency. But apart from that, you can go off and do whatever. When I made this last night, I left the pot on the stove and curled up in a quilt on my bed and read Leslie Jamison’s Grand Unified Theory of Female Pain, which is an excellent Depression Read to complement your Depression Meal.

Anyway, guys, it was absolutely fucking delicious. Like, oh my whole entire god. I don’t even know how it’s possible for tomatoes and onions and butter to be this good, but I am literally never going back to canned sauce. This made me enough, again, for six servings. You can actually see the steam rising off the sauce in the second picture. I’m drooling. 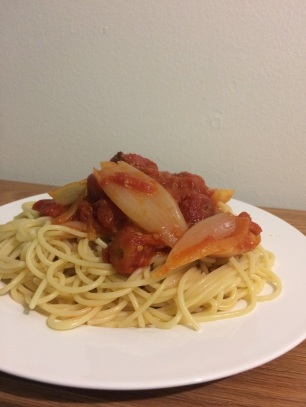 Anyway, godspeed, Nichers. Take good care of yourselves, and enjoy the greatest Depression Meal of all time.