If you’re like me, you’re gay and you have depression. And if you’re like me, you’ve come up with a few ways to cope with the day-to-day blues. Maybe you go for walks in the park. Maybe you soak in a bubble bath. Maybe you listen to “This Year” by the Mountain Goats on repeat and bask in John Darnielle’s triumphant howling until your will to live has been restored to you.

Today’s coping mechanism? Plowing through the Sesame Street vault and watching as many clips of Bert and Ernie as I can get my gay, depressed hands on.

Now, these videos are healing for a couple of reasons. They are, first and foremost, prime examples of sweet, uncomplicated preschool humour, transporting you momentarily away from the travailing of adult life. And, of course, Bert and Ernie are gay. Sesame Workshop has denied it for years, but they also sell official merch depicting Bert and Ernie posing with rainbows. When the Supreme Court struck down DOMA in 2013, Bert and Ernie appeared on the cover of the New Yorker, cuddling on the couch and watching the justices deliberate on television.

Anyway, if you are having a bad day, if you need a pick-me-up, or if you just want to renew your faith in the healing capacity of gay love, here is a list of Bert and Ernie at their best, curated with care by yours truly. Ordered, naturally, from least to most gay.

Hang in there, buddy. It’ll be okay.

Bert and Ernie go on a fishing trip, and Ernie wows Bert with his preternatural ability to call fish into the boat with some sort of fish-attracting siren song.

Bert wraps up a surprise present. Ernie thinks it’s for him. It’s not, actually, but that’s not about to stop Ernie from unwrapping the gift and claiming it.

Ernie asks Bert to pretend to get angry a couple of times. Bert throws two mock temper tantrums and tires himself out. It softens the blow a little when Ernie eventually has to lay some bad news on him.

7. Bert and Ernie Blow a Fuse

Ernie’s watching TV. Bert wants to play a record. They proceed to argue about this and turn on every noise-making thing in their apartment until they blow a fuse and apologize to each other in the dark.

Bert shows Ernie his bottlecap collection. Ernie comes through with the rare bottlecap Bert has been searching for! Delightful.

Ernie gets thirsty in the middle of the night and Bert brings him not one, not two, but three glasses of water in rapid succession. Gotta take a page out of the Old House Memes playbook for this one: 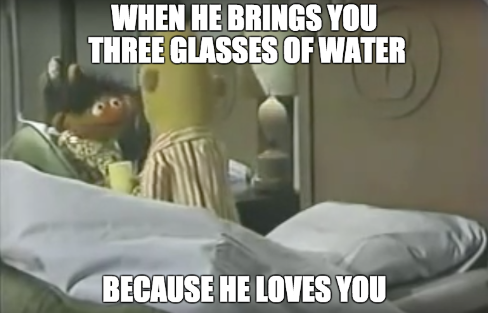 Ernie is eating cookies in his bed. Bert tells him to stop, because he’s making a mess. Ernie proceeds to hop into Bert’s bed and eat cookies next to him. Bert allows it, but he’s not happy.

3. Was Bert Abducted by Monsters?

Bert is a little late coming home. Ernie works himself into a frenzy, convincing himself that Bert has been abducted by monsters, and that the monsters have taken Bert to a fun party, and Bert is never coming home because he’s having so much fun and he likes the monsters more than he likes Ernie. Just as Ernie is beginning to cry at the very thought, Bert comes home and reassures Ernie that he’s not going anywhere, and that there were never any monsters. Ernie is relieved.

Ernie comes home early from summer camp because he was homesick and he missed Bert! He shows Bert a number of souvenirs from camp, including a special paperclip for Bert’s collection. This one legitimately made me cry. I am an adult. I pay taxes.

Ernie wakes Bert up in the middle of the night and asks, “Do you like me?” Then they sing  – sing! – about how much they like each other. A tender moment, and an unequivocally gay one. I could see this superseding “The Predatory Wasp of the Palisades is Out to Get Us!” as the quintessential OTP song.

7 thoughts on “Gay? Depressed? Here Are Ten Profoundly Healing Clips of Bert and Ernie to Get You Through the Day”