Some weeks ago, Esquire published Lili Anolik’s long-form exploration of the famous — and famously debauched — Bennington College Class of 1986. After rabid consumption of the article, multiple times, over a period of 48 hours, I have compiled this list of the quotes from the which most inspire the physical ache of not being Donna Tartt — specifically, not being Donna Tartt Attending Bennington College in 1982. 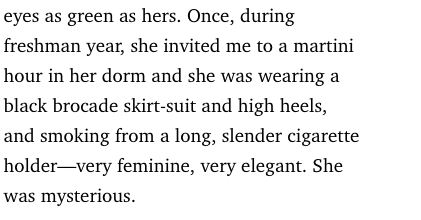 As with every descriptor of Donna Tartt, this induces The Tartt Ache. I would so like to be described as feminine and elegant while imbibing nicotine that I might forego buying a Juul for a cigarette holder instead. I also love the idea of limiting my hosting duties to a single hour.

Unfortunately, a large part of the reason I ever smoked in the first place was so I could just leave events whenever I wanted to go smoke by myself, so that dulls the Ache a little.

My partner Billie and I have a fictional pug. She is a black pug and her name is Kremlin. Although this quote refers to Donna Tartt’s post-college years — and not, therefore, Donna Tartt Attending Bennington College in 1982, who I want to be probably more than anything — I would also probably give anything to be Donna Tartt Owning A Pug in 1986.

I admit that this is a darker facet of my personality, but that’s fine. We all understand that Donna Tartt Attending Bennington College in 1982 was also a person with dark facets. But God, do I miss being twenty years old and drinking more than I could ever imagine. I would have loved to do that while also being lucid enough to strike fear into the heart of Brett Easton Ellis with a single glare, like DTABCI1982.

For example: I was once moving an ancient steam trunk by myself, in an Uber, while wearing a vintage Ralph Lauren blazer that I can only get away with wearing for about a week and half every spring and fall. The entire time, I was thinking, “This trunk is lovely, but I will never, ever be Donna Tartt Attending Bennington College in 1982. Goddamnit.” I’m sure the Uber driver was thinking the same thing.

5. Donna Tartt’s Rarefied Talent for Secrecy and Fantasy, and Her Trancelike Aura Also

Periodically, I have these nights where I am awake until four in the morning, searching for people I haven’t spoken to in years on the internet. Usually, I’m searching for some kind of sign that maybe, from time to time, these people feel a hole about the size of me in them. Usually, I’m hoping that they’ll somehow covertly indicate this in an Instagram caption. However, I am not Donna Tartt Attending Bennington College in 1982, and I can only dream of creating the Trancelike Aura that she exudes even through photos.

Whenever I feel particularly confident at a party — say, telling a story to a large group of people, feeling perfectly “contained and theatrical” — my brain will awake the next morning and immediately throw me into a panic the next morning, hissing at me, “Listen, loser, you were nothing Donna Tartt Attending Bennington College in 1982. In fact, you were doing a pitch perfect impersonation of Jan from The Office when she dances to that CD recorded by her former assistant, Hunter, in the Dinner Party episode.” I usually need at least three helpings of Chinese food to recover.

8. Donna Tartt Being Happy at Bennington

Instead, I went to a massive school filled with brutalist architecture and I lost my mind,. Aside from rampant, out-of-control bipolar disorder, I experienced almost nothing close to being Donna Tartt at Bennington College in 1982.

Now, all that is behind me, and I look at my lovely little life, and I know that I would change nothing if it meant I couldn’t have all this.

…But I would have also like to have been happiest at Bennington.

Caitlin is a 25 year old, living in Toronto, Canada working in television, living with her partner, a cat, a rabbit and a revolving door of other animal guests and fosters. You can read more of her yelling into the night at @caitlinevelyn on twitter. View all posts by caitlinevelyngrace

5 thoughts on “Anyone Else Physically Aching to Swap Bodies with Donna Tartt After Reading That Esquire Article About Bennington College in the Eighties? Anyone? No? Just Me?”