So, I have no idea what I watched when I first wrote to you about Doctor Richter (Russia’s direct remake of House MD), but it definitely wasn’t the actual show. Today, I was blessed enough to find the first few episodes uploaded to youtube. I’d love to stop talking about it and let Russia-1 go their own way on this one, but feel compelled to correct my misinterpretations. Out of fairness to the Russians.

Up front, the theme song is The Dance of the Sugar Plum Fairy. Other than having to see David Shore’s name juxtaposed with Tchaikovsky, I’d consider that an improvement.

Russian Wilson was there a lot. I will not speak to the actual text of the arguments he had with Russian House, but they seem to have been largely in jest. There is no apparent dating going on between Russian Cameron, Russian Chase, and Russian Foreman. Sigh of relief there. 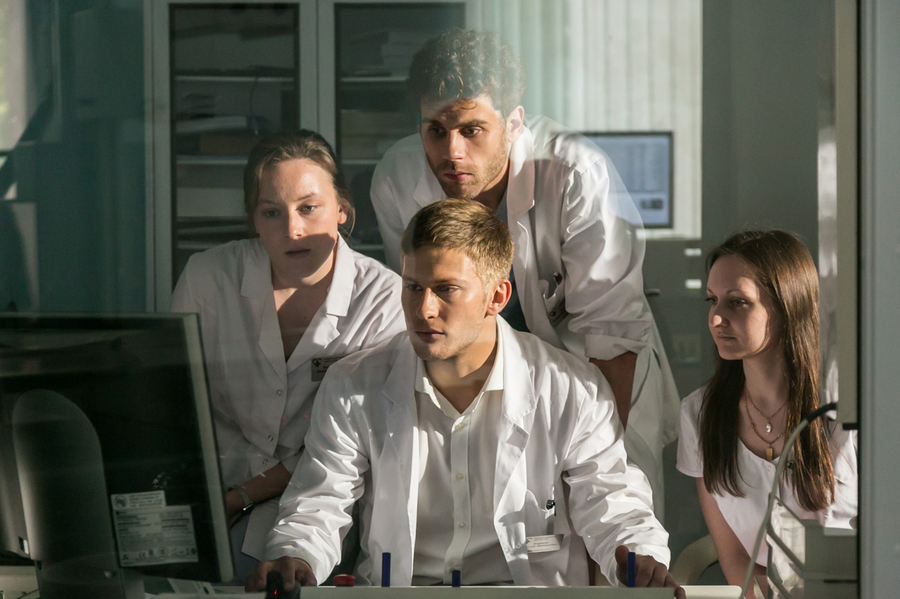 I also discovered Chase is called Vladimir, Cameron is called Olga, and Foreman is called Ruslan in Russia. Wilson is Dr. Rodionov, an oncologist, and House is Dr. Richter. As one youtube commenter said, though, “For the best of laughter, you can add to these characters the names of House, for example: Ruslan Foreman, Volodya Chase.*” So have their names really changed?

The gratuitous medical gore which I so feared would be lost in translation came through in the form of a mid-MRI tracheotomy during episode one. Really made me feel right at home. There was also a brain surgery.

Russian House got a drink thrown in his face.

During a breaking and entering, Vlad Chase ate raw bacon off a plate. If I spoke Russian fluently, I would know why.

All things considered, the two episodes of Russian House I watched adhered beautifully and gracefully to the Formula. House derided parents. Cuddy scolded House. House asked Wilson for some kind of medicine and then made his junior team break into a patient’s house, where they got into some shit. Realizations were had, and none of them were gay. Emotional music played during the last two minutes while House, left to himself, looked out from the roof of the hospital over the city.

The like to dislike ratio is 233:174. Everyone in the comments hates it.  “Dumb idiots parody ‘Dr. House’!*” they say. “I’ll even look at Dr. House for a bit. but from Richter I’m out.*” As long as this show is reviled, there is nothing for me to add.

*Translated from Russian with Google Translate

3 thoughts on “Allow Me to Clarify: a Доктор Рихтер Update”